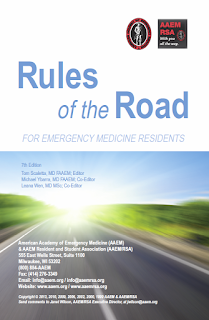 AAEM/RSA is proud to present weekly summaries of our popular publication Rules of the Road for Emergency Medicine Residents. As a multi-part series, these posts address many important topics ranging from the history of emergency medicine to resident wellness and job search suggestions.

1960’s: Emergency medicine evolved out of a need to care for a growing population that sought care for emergency conditions. By 1960, emergency department (ED) visits were rising across the country and the demand for emergency care was high. Physicians, however, lacked the appropriate skills, and there was a need for specialized training. In 1967, the American Medical Association (AMA) established a committee on emergency medicine, and in 1968, the American College of Emergency Physicians (ACEP) was founded.

1980s: In 1988, ABEM began to require EM residency training to qualify for the ABEM certification exam. In 1989, EM became a primary board. Also in 1989, the Society for Academic Emergency Medicine (SAEM) formed.

1990s: In 1992, James Keaney published "The Rape of Emergency Medicine," which explored the corruption in EM and the exploitation of emergency physicians. Certain people in the field were making huge profits based on unfair business practices, such as hiring unqualified emergency physicians willing to work for less pay. This reality triggered the formation of the American Academy of Emergency Medicine (AAEM) in 1993 to promote fair and equitable practice and promote the highest level of patient care.

In terms of residency program growth, in 2013, there were 170 allopathic and 49 osteopathic EM residency programs. The resident section of AAEM was formed in 1999 and is known as the AAEM Resident and Student Association (AAEM/RSA). This organization's primary goals are to advocate for EM residents, build a community, and promote direction and change in the field.

For more information, be sure to look at your copy of AAEM’s Rules of the Road for Emergency Medicine Residents! http://www.aaem.org/publications/aaem-book-store.
Posted by AAEM Resident and Student Association at 6:00:00 PM

Email ThisBlogThis!Share to TwitterShare to FacebookShare to Pinterest
Labels: Resident Rules of the Road, Residents