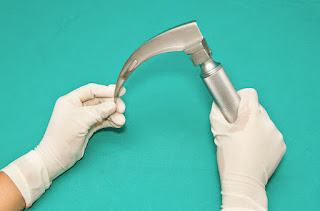 
ACE inhibitor (ACEi) induced angioedema is a potentially life-threatening complication of a very common class of medications, and is something every emergency physician should be prepared to manage. I personally witnessed three cases on a recent ICU rotation, and in one of the cases the patient required an emergent tracheostomy due to unsuccessful intubation attempts by the EM attending, an ICU attending, and the head of the anesthesia department.

The incidence of angioedema is between 0.1% and 0.7% of people prescribed an ACEi and is nearly 5 times higher in people of African American descent. While the mechanism for ACEi-induced angioedema is incompletely understood, the reaction likely involves decreased degradation of bradykinin and resulting vasodilation. The typical presenting symptoms are isolated swelling of the face, eyes, lips, tongue, and the airway, notably without urticara or other skin findings. Interestingly, ACEi angioedema can also affect the intestines, presenting with pain, nausea, vomiting, and diarrhea.[1,3,4]

Symptoms can occur within a week of starting ACEi therapy, or can present after many years of use. Even after removal of an ACEi, some patients can continue to have episodes of angioedema. Most recurrences happen within the first month but can rarely continue for up to six months.[4] Risk factors include a history of previous episodes, age older than 65, aspirin or other NSAID use, female sex, and a history of smoking.[1]

Airway management is paramount in cases of angioedema, and the use of fiberoptic and video airway equipment can be helpful in these situations. Studies have shown that while fiberoptic intubation has traditionally been the preferred method, it has a steeper learning curve and takes more time to secure an airway when compared with intubation using video laryngoscopy. This can be vitally important in a situation where there is continuous and progressive airway swelling.[2]

After securing the airway, be sure to promptly discontinue to the ACEi. Failure to do so can lead to future episodes of angioedema which can be more severe. Typical treatments for allergic reactions such as epinephrine, antihistamines, and glucocorticoids are often tried but are not effective. Case reports have shown that rapid administration of FFP has some benefit in reversal of symptoms.[3,4] Even without treatment, however, symptoms typically resolve on their own within 24-72 hours.[1, 4]

While angioedema due to ACEi is a rare event, it is vital to recognize immediately. Control the airway, consider FFP, and be sure to stop the ACEi therapy and find another medication to control the patient’s blood pressure. Mild cases of angioedema not involving the tongue or airway that are seen in the emergency department should be observed for at least 6 hours before considering discharge. Patients with airway or tongue involvement, or worsening symptoms, should be admitted with a low threshold for intubation.[1,3]

Angiotensin receptor blockers (ARBs) are not a safe alternative in patients who have developed ACEi induced angioedema. Although they do not have the same mechanism of action, there is some evidence that angioedema can occur after treatment with ARBs in predisposed patients, possibly due to ARB agonism on the type 2 angiotensin receptor, which elicits vascular permeability and vasodilation.[1]

There is an AAEM clinical practice guideline for ACEi induced angioedema which can be found here: http://www.aaem.org/em-resources/position-statements/2006/clinical-practice-guidelines. Key suggestions include empiric discontinuation of ACEi therapy in any case of angioedema and intubation of any such patient with significant distress or stridor, drooling, or tongue edema.[1]


Posted by AAEM Resident and Student Association at 2:00:00 PM