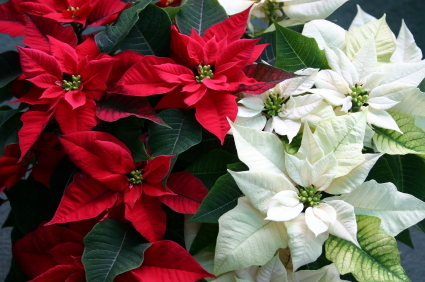 Contrary to popular belief, the poinsettia (Euphorbia pulcherrima) is not a toxic plant. This misconception began as an urban legend dating back to 1919 when the two year old son of an Army officer stationed in Hawaii reportedly died of poisoning from what was believed to be a poinsettia leaf.

Even though the story was later retracted, the poinsettia leaf had been incorrectly identified as the cause of death. Modern research has worked to prove that there is no validity to these toxicity claims. After reviewing over 22,793 cases of poinsettia poisoning, investigators from the Children's Hospital of Pittsburgh and Pittsburgh Poison Center reported no deaths from exposure and cited mild to moderate gastrointestinal tract irritation as the only adverse effects. They also described how 92.4% of cases didn't develop any symptoms related to exposure and how 96.1% of cases weren't even treated in a health care facility. In addition, POISINDEX claims that it would take over 500 poinsettia leaves for a 50lb child to reach a potentially toxic dose of the plant. Not only does this research debunk the myth regarding poinsettia toxicity, but it also allows the poinsettia to remain a safe and prominent emblem throughout the holiday season.

Exposure to mistletoe may not prove to be as forgiving. Mistletoe is the common name given to over 1,400 species of plants belonging to the order Santales. Although European mistletoe (Viscum album) and North American mistletoe (Phoradendron serotinum) are the two species sold commercially during the holiday season, they each contain different compounds that can alter major biological functions. Structural variance accounts for the similarities and differences in toxicity between the European mistletoe and North American mistletoe. While ingestion of North American mistletoe can lead to gastroenteritis, exposure to concentrated extracts of European mistletoe can result in severe toxic effects such as seizures, hallucinations and anaphylaxis. Additionally, both species contain toxins that have also been proven to produce hypotension, bradycardia, as well as have a negative ionotropic effect on the heart. Therefore, the degree of mistletoe toxicity is dependent upon both the type and quantitiy of mistletoe that has been ingested.

Holly is another holiday plant that can be toxic and even lethal at high doses. Belonging to the family Aquifoliaceae, holly is part of the genus Ilex that contains over 600 different species of the plant. Most species of holly contain both tannins and saponins: two compounds which lead to toxicity when ingested. While tannins are polyphenolic compounds that interfere with the normal absorption of proteins, saponins are amphipathic glycosides that confer toxicity via sterol complexation. Both tannins and saponins contribute to gastroenteritis that develops upon ingestion of holly. Not only does this lead to vomiting and diarrhea, but it also results in dehydration and electrolyte imbalances as well. The more severe toxic effects that are related to higher doses of holly ingestion can be attributed to tannins. Aside from irritating the gastrointestinal tract, tannins have also been found to be responsible for kidney irritation and liver damage that could prove to be fatal.

Posted by AAEM Resident and Student Association at 4:05:00 PM