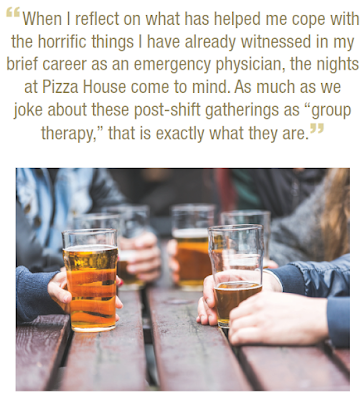 It was Monday night, and Halloween. It was the perfect storm of an ever-expanding waiting room and a revolving-door resuscitation bay occupied by sick patient after sick patient. Following an emotionally exhausting shift, I sat with some fellow residents at The Pizza House, a local late-night joint where we grab food after a shift, tell stories, and debrief in Ann Arbor. We often jokingly refer to these sessions as “group therapy.” The mood that night was more somber than usual, despite the roar of intoxicated college students at nearby tables dressed up like Pokémon trainers and Game of Thrones characters.

My co-resident shared the story of two young males who suffered cardiac arrest by drowning, after jumping into a cold lake to rescue their friends who, unknown to them, had already made it to shore after a boating accident. Another resident shared the story of a teenage boy who died after being struck by a car while crossing the street on his way to school. Another shared the story of caring for a mom who presented with pre-eclampsia, a few days after her infant was unsuccessfully resuscitated by another of our colleagues and died from SIDS. I had just cared for a man who suffered a massive intracranial bleed while going to open the door for a few trick-or-treaters. I looked his teenage son in the eye and tried not to well up with tears as I translated the findings of the CT within five minutes of meeting him. Suddenly, it made sense that we had been so eager to sit, relax, and have a beer together. We had certainly earned it, based on the events of the last week. All of us needed to talk to someone who would understand.

We often think of PTSD as a disease that affects war veterans, assault victims, and survivors of motor vehicle accidents. We do not often think of it as something to which we emergency physicians are vulnerable. How many truly horrific scenarios have we witnessed without ever really coming to terms with the impact these moments have on us, not just as emergency providers, but as human beings? How often have we felt alone when dealing with a sudden death, an act of lethal violence, a wife losing her husband, a parent losing a child, or a resuscitation that is ultimately unsuccessful despite our blood, sweat, and tears?

PTSD is a mental health disorder that can develop after exposure to a traumatic event. Individuals with PTSD generally have symptoms that meet criteria in four different categories: reliving the event through nightmares and bad memories, avoidance of situations that bring up memories of the event, an increase in negative beliefs and feelings because of the trauma, and hyperarousal.

According to the DSM V, the PTSD prevalence rate for Americans is 6.8%. A systematic review and meta-analysis published in 2012 found that emergency and rescue workers have a prevalence of PTSD that is much higher than that of the general population. The worldwide prevalence in rescue workers was 10% — 1 in 10 people who work in emergency medical settings. Another 2003 survey, looking at PTSD In emergency medicine residents in non-mass casualty settings, found that many EM residents reported symptoms of PTSD, and symptoms of PTSD significantly increased as resident level of training increased. In that study, 12% of residents met criteria for PTSD, and 30% had one or more symptoms in each category. In addition to experiencing trauma, the cumulative stress of practice may cause PTSD.

Even though the majority of us may never meet the DSM V criteria for PTSD, all of us will continue to experience the cumulative effects of traumatic and stressful scenarios on a daily basis — scenarios that leave scars and haunt us long after the event has transpired.

When I reflect on what has helped me cope with the horrific things I have already witnessed in my brief career as an emergency physician, the nights at Pizza House come to mind. As much as we joke about these post-shift gatherings as “group therapy,” that is exactly what they are. We need to talk about our experiences, reflect on them, and allow ourselves to process the emotional response. We need to know that we are not alone. Hearing the stories of our colleagues and sharing our experiences fosters a sense of community and combats a sense of isolation.

I recently learned about an initiative of the New York City residency programs called “Airway: A City Wide Night of Storytelling from the ER.” This event was led by several physicians, including Tyler Beals, Arlene Chung, Mert Erogul, and Josh Schiller. At this intimate gathering of residents and attendings from across the NYC region, stories are shared among emergency physicians — some inappropriate, some hilarious, and some heartbreaking. Individuals meeting each other for the first time develop a bond and sense of closeness. There is a therapeutic aspect of sharing common experiences, combating the isolation of medical training and the imposter syndrome that plagues many residents.

Although the exposure to constant trauma and stress is one of the most emotionally, mentally, and physically challenging aspects of our profession, some may argue it is also one of the most rewarding. As emergency physicians, we have the opportunity to be the best part of someone’s worst day. We are there for our patients in their time of greatest need. Although difficult, it is a great privilege and honor to be able to guide another through the most taxing time of his or her life, and to do it within minutes of meeting that person for the first time. Nevertheless, we must remember to care for ourselves so that we maintain our empathy, humanity, and well-being.