What can be considered a cause of recurrent pneumothoraces?
Upon further questioning, the patient’s past medical history consists of clinically diagnosed endometriosis treated with NSAIDs. She has no history of asthma, COPD, chest injury, or history of smoking. The patient has no history of Marfan’s syndrome, which may increase the risk of pneumothoraces due to apical blebs or bullae.

How will thoracic endometriosis present?

Typically presents with cyclical episodes of chest pain and dyspnea beginning in the 3rd-4th decade of life, 2-3 days after the start of menstruation.
How does this happen?

There are several theories on how this can occur. Pathogenesis theories include retrograde menstruation entering the pleural space through lymphatic channels, diaphragmatic fenestrations, or hematogenous spread. During ovulation, the elevated prostaglandin F2 levels may lead to vasospasm and ischemia in the lung, resulting in subsequent alveolar rupture and pneumothorax. An additional theory, the anatomic model, suggests that the loss of the cervical mucus plug during menses leads to communication between the environment and the pleural space.

Why do the pneumothoraces most often present on the right side?

This is thought to be secondary to the peritoneal current in which fluid moves clockwise from the pelvis to the right paracolic gutter to the subphrenic space. Endometrial tissue is likely to follow this same pattern. The falciform ligament prevents further movement of fluid to the left.[2]

How do we diagnose thoracic endometriosis?

What are the treatment options?
This patient connected her previous pneumothoraces to her menstrual cycle and was currently on day 3. VATS where endometrial implants were visualized and resected in the thoracic cavity. Her previous episodes were correlated to the onset of her menstrual cycle. Although she had previously declined oral contraceptive therapy in an attempt to conceive, she was started on oral contraceptive therapy for continued management of her endometriosis and did not have any further recurrences of pneumothoraces. 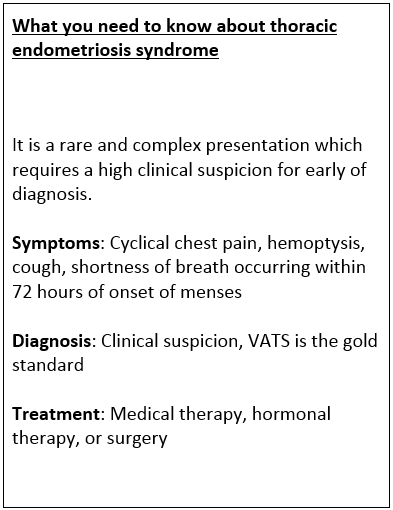 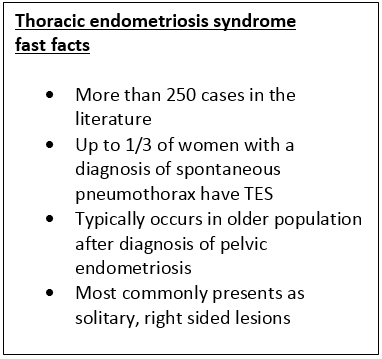