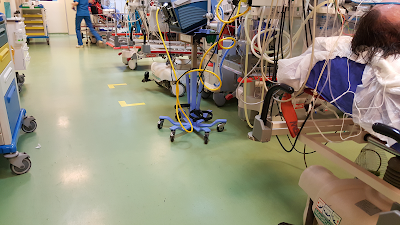 Your three-person resuscitation bay has four boarding intubated patients when the woman that you just stabilized becomes tachypneic to the 70’s with an O2 sat of 65% on non-rebreather. As you get her onto CPAP ventilation, the overhead alert announces that the helicopter has landed with a trauma arrest. That’s when you hear someone yelling from the adjacent CT scanner, “Ajuta! Ajuta-ma!”

At least that’s what you think they said. After all, the cries of a CT tech when a patient codes in their scanner is universally understood, and you’re in Romania.

Many residents and students are interested in global health electives as a way to work in an underserved country, to fill an area of need, or perhaps they see it as a way to be able to practice above their level of training.

But global health takes on many forms.

Global health entails working with refugees and immigrants in your community; research on a disease that is devastating a population or one that could become a major threat in your practice population if not curtailed; working in an underserved or resource limited setting far different than most US residency programs; and of course knowledge sharing of management practices in a hospital confronting challenges not unlike your own.

I spent a month doing the latter at the Spital Judetean de Urgenta in Targu Mures, a mid-size town in the middle of Romania, in Eastern Europe. During that time I observed issues common in the US such as frustration of care provided at outside facilities, disagreements with consultants, challenges with patient boarding, and challenges surrounding differing cultural beliefs and language barriers - in this case Romanian, Hungarian, and Roma (more commonly known as Gypsy).

Some of these challenges were far greater in Romania, especially intubated patients boarding and managed by emergency physicians for weeks on end. There were other areas where practice differed - likely for the better - for Romanian patients. Having long term ICU-level patients occupying space in one’s ED means that Romanian emergency physicians straddle the line between resuscitationists and intensivists and as such have a knowledge-base on critical care topics, especially in terms of ventilation management, that is more advanced than most US trained emergency physicians.

Perhaps the greatest strength in Romania, and our greatest difference, is the pre-hospital service, SMURD. This ambulance and air response service optimizes the use of emergency physicians in the pre-hospital setting so that potential life threats, particularly in remote areas, have a physician on scene to begin hospital level care while still in the field. This meant that many patients arriving in the emergency department arrived already resuscitated and could bypass the resuscitation bay, or they arrived to the resuscitation room already intubated and partially stabilized.

Other patients, of course, had other plans. The man from one of the non-resuscitation areas of the ED who had nearly just coded during his CT angiogram (CTA) scared the CT tech of course, but not the resuscitation staff who were far too familiar with patients rapidly changing their conditions. As CPR was started, the patient went into a wide complex tachycardia and was stabilized after epinephrine and defibrillation then started on treatment for possible contrast anaphylaxis as his CTA was negative for pulmonary embolism. Unfortunately, though his color improved, his perfusion did not, and he was pronounced the next day - still in the three person resuscitation bay now next to five other boarders including the intubated trauma code from the day before, an elderly woman in unstable SVT, and a young woman with atraumatic abdominal pain and a positive FAST.

And how did the tachypnic patient fair? After a little Ativan, she tolerated CPAP well and was saturating adequately on a non-rebreather despite her advanced sarcoidosis such that she could make room for other more critical patients in the resuscitation bay.