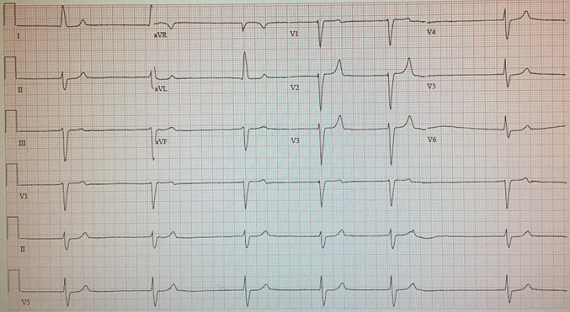 What’s going on? He looks stable despite having this EKG. The physician orders placement of pacer pads and 0.5mg of atropine, giving a few moments to think.

So, what’s on the differential?[1]

Could this be hyperkalemia from renal failure? This would explain the hypoglycemia. Acute renal failure can impair insulin clearance causing his blood sugar to drop; and a marked hyperkalemia can also produce a very lethal bradycardia.

The critical care panel comes back quickly with a potassium of 8.0. His creatinine later returns at 7.0. The physician immediately temporizes him with calcium gluconate, sodium bicarbonate, insulin and D50. Just minutes after getting his first amp of calcium gluconate his QRS starts to narrow; the repeat EKG looks like this: 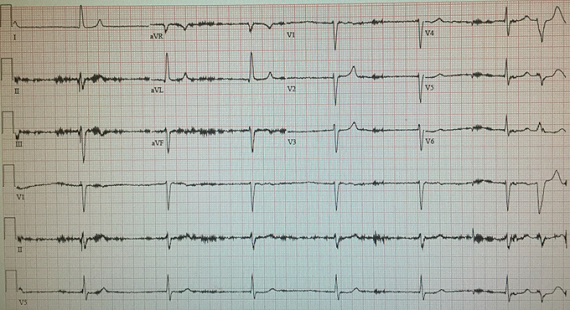 When we suspect hyperkalemia, we’ve all had the EKG progression ingrained. First, there are peaked T waves with or without QT shortening. Next comes PR lengthening and QRS widening, with possible loss of the P wave. This, of course, can progress to the dreaded sine wave.

What other EKG changes can hyperkalemia cause? It turns out that hyperkalemia can do just about anything to the EKG. It can affect all of the intervals: PR, QRS, or QT. It can lead to conduction delays including LBBB, RBBB, and fascicular blocks.[2] It can cause arrhythmias such as sinus bradycardia, ventricular tachycardia, ventricular fibrillation, idioventricular rhythms, and asystole.[3,4] It can cause loss of P waves or even a Brugada pattern.[5] In this particular case, the patient developed an irregular bradycardic idioventricular rhythm with QRS widening. With just about any abnormal EKG, hyperkalemia has to be on the differential.

The Case Resolved
The patient went to the critical care unit, where his hyperkalemia began to resolve with aggressive fluid resuscitation. The next morning his potassium was down to 5.2; his EKG is shown below: 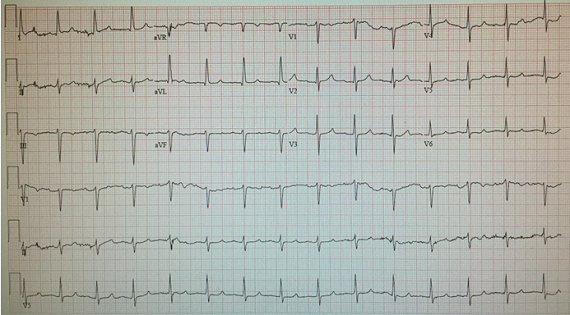 We must carry a high index of suspicion for this diagnosis. Otherwise, we may miss a highly lethal, but highly treatable cause of bradycardia.