Psychiatric Complaints in the ED — What to Keep in Mind 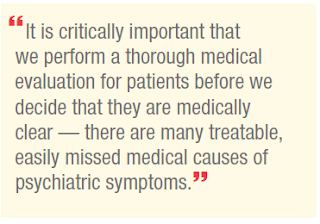 A familiar scene in many emergency departments: you are on a busy overnight shift. You have just finished caring for a trauma patient and your part of the ED is filled with high-acuity patients. You see that a new “crisis” patient has been placed in a room, so you go assess him. You find a disheveled young male with flat affect, who appears to be responding to internal stimuli. He is able to tell you that he had a recent inpatient psychiatric hospitalization. He is not taking his medications. He agrees to be seen by the crisis team. You leave and return to your desk to run the list and get caught up on charting.

This brief moment of calm is short-lived, as you hear a crash and shouting. You return to the room to find your patient aggressive, angry, and screaming profanities at the ED staff. You chemically sedate him and the nurse draws the requisite screening labs for medical clearance. Hours later your patient remains somnolent, with no urine drug screen, and is still awaiting evaluation by the crisis team. This is a situation experienced by most providers and is common in most EDs.

ED visits for psychiatric complaints are increasing nationally, and beds for inpatient psychiatric care continue to decrease in number. Not all institutions require screening labs to be considered “medically clear.” Indeed, many institutions have no policy on the matter. However, many state psychiatric hospitals require a number of tests prior to accepting a transfer. Nationally, psychiatric patients spend significantly longer periods of time in our EDs than nonpsychiatric patients and have high rates of recidivism. One study found that 21% of discharged patients with psychiatric complaints had return visits within a 30 days.[1] The chaotic, busy ED is rarely a restful or quiet place for the agitated or over-stimulated patient. Patients may board for hours or even days awaiting inpatient psychiatric placement, without receiving optimal care while they wait.

It is critically important that we perform a thorough medical evaluation for patients before we decide that they are medically clear — there are many treatable, easily missed medical causes of psychiatric symptoms. Personal case examples include a patient found to have severe hyponatremia secondary to a delayed diagnosis of lung cancer and another with anticholinergic toxicity from diphenhydramine overdose. We have a great responsibility, and committing someone to inpatient psychiatric care against their will — whether they are suicidal, homicidal, psychotic, or disorganized and unable to care for themselves — is a difficult decision to make. Patients may also intentionally overdose on prescription or over-the-counter medications, and may not disclose this information unless asked directly. One of our ED psychiatrists advises that when asking patients if they’ve thought of committing suicide, ask how close they’ve come to doing so — the answers may surprise you.

Prior studies have questioned whether we are doing an adequate history and physical exam on our psychiatric patients. Tintinalli et al., found that 56% of patients had no mental status documentation at triage and that several significant medical findings were missed, including a femur fracture, HIV encephalopathy, multiple sclerosis, cardiac ischemia, and sepsis.[2] Another study of ED medical clearance found that only 52% of cases had a complete set of vitals, with 6% of patients having no vital signs documented.[3] Henneman et al., found that 63 of 100 patients with new-onset psychosis had a medical explanation for their symptoms.4 By taking short cuts with our psychiatric patients — whether by inadequate history, physical examination, or vital signs — we put our patients and ourselves at risk. However, is reflexively sending more lab tests and obtaining additional imaging studies the answer? Are we using testing as a crutch for abbreviated histories and physical exams? Other studies have found limited support for universal lab testing for medical clearance, with few misses or findings that would change management.[5,6] We also often obtain head CTs for patients with new presentations of psychosis, yet several studies (although not based on ED patients) failed to demonstrate changes in clinical management resulting from this practice.[7,8,9] Prior studies have suggested protocol-driven approaches to standardize the medical clearance process, but great variation between institutions remains.[10,11]

Ultimately, it is incumbent upon us as ED providers to sort through these possibilities and decide how to best care for our patients. As a specialty, we shoulder the burden of a broken system with inadequate resources and spend many hours caring for these most vulnerable of patients. Many studies evaluating this issue are retrospective chart reviews. Perhaps, through additional research with prospective, ED-based studies and with initiatives to provide a more universal and evidence-based approach, we can improve our practice, standardize our medical clearance process, and better meet the needs of our patients.