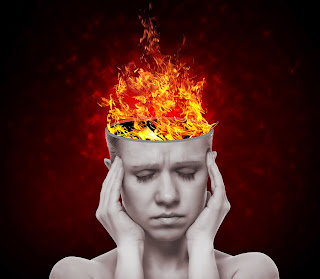 A 19 year old otherwise healthy female presents to the ED with five weeks of changed behavior with increasing agitation, paranoia, violent behavior, and facial tics. The patient has no psychiatric history and has had no recent infections, trauma, fever, or change in eating habits. The patient’s basic labs (including urine drug screen) and CT brain are normal. So, what the heck is going on….

Encephalitis should always be considered in a patient with new and unexplained onset of psychiatric disturbances. There are many etiologies of encephalitis. One rare, but potentially underdiagnosed, cause is anti-NMDA receptor encephalitis. The California Encephalitis Project looked at 761 cases of encephalitis of uncertain etiology in patients under 30 years old. Of the cases of identified etiology, anti-NMDAR encephalitis was the leading entity (32 of 79 cases) identified followed by enterovirus (n=30), HSV (n=7), VZV (n=1), and West Nile Virus (n=5).[1] This disease is female predominant (4:1) and more commonly seen in younger patients in their teens and early twenties.

Signs/Symptoms:
Patients will have a range of psychiatric changes: agitation, paranoia, psychosis, violence, facial tics, sleep disorders, or changes in speech. If undiagnosed these will progressively get worse, and the patient may develop ataxia, AMS, catatonia, and coma. This diagnosis is often missed and patients are often misdiagnosed with a primary psychiatric disorder early in the disease process, leading to worse outcomes.

Theoretical Pathology:
NMDA receptors are part of the regulationcontribute to regulation of numerous processes such as breathing, ambulation, balance, learning, memory, and behavior. Similar to ketamine’s mechanism of action, entry of NMDAR antibodies into the CSF leads to a decrease in effective receptors. This is sometimes a paraneoplastic syndrome most commonly associated with ovarian teratomas, which have been shown to express antigens similar to those targeted by anti-NMDAR antibodies in the brain.[2]

ED Concerns:
Although more likely to be formally diagnosed on an inpatient basis, Anti-NMDAR encephalitis should be considered in the ED. Patients diagnosed early and those with resectable tumors tend to have the best outcomes. In a patient prompting a high clinical suspicion, this diagnosis should remain on the differential so CSF anti-NMDAR antibody testing can be sent early in the clinical course.