Management of Upper GI Bleed in the Emergency Department 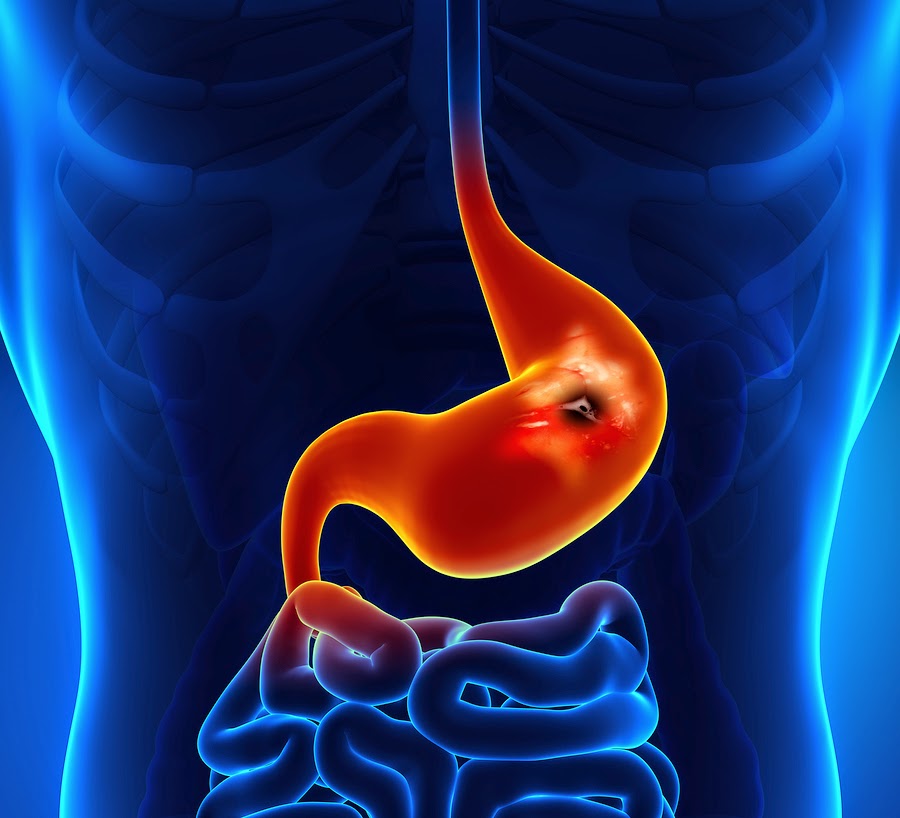 Introduction to Upper Gastrointestinal (GI) Bleed
Upper GI bleeding is a potentially life-threatening hemorrhage originating anywhere along the GI tract from the esophagus to the level of the ligament of Treitz. Bleeding from the upper GI tract is four times more common than bleeding from the lower GI tract and is a major cause of morbidity and mortality.[2] Upper GI bleeding is associated with non-steroidal anti-inflammatory drug (NSAID) use, and in patients with a bleeding peptic ulcer, it is associated Helicobacter pylori infections. According to a review in American Family Physician, peptic ulcer bleeding accounts for more than 60% of upper GI bleeding cases.[3] Esophageal varices, most commonly associated with liver disease, [9] make up approximately 6% of upper GI bleeding cases. Other etiologies include arteriovenous malformations, Mallory-Weiss tears, gastritis, duodenitis, and malignancy.[3]

Manifestations of Upper GI Bleed
The most common signs of acute upper GI bleeding are hematemesis (vomiting red blood), “coffee ground emesis,” and melena (tarry black stools). Hematochezia, red blood in the stool, usually suggests lower GI tract bleed. However, if hematochezia presents with signs and symptoms of hemodynamic instability, such as syncope, postural hypotension, tachycardia, and shock, one should attempt to rule out an upper GI tract source of bleeding.[1] Additionally, it is important to note any signs of chronic liver disease, such as spider angiomata, gynecomastia, splenomegaly, ascites, pedal edema, and asterixis.[2] Esophageal varices due to cirrhosis are a less common but more serious cause of upper GI bleeds. A single episode of variceal bleeding has a 30% mortality rate, and 60 to 70% of patients die within one year, usually of the underlying liver disease.[1]

Management of Upper GI Bleed in Emergency Department
The first step in managing an acute upper GI bleed is to stabilize the patient with airway and volume restoration. Then the patient’s need for intervention is assessed using the Blatchford scoring system. Insertion of a nasogastric tube and inspection of the aspirate can be useful, especially if it contains bright red blood, although caution should be taken when placing a nasogastric tube in a patient with varices, since the tube can potentially exacerbate them. It is recommended to assess for signs of chronic liver disease in an effort to rule out variceal bleeding. If examination suggests variceal bleeding, patients should be given somatostatin analogues (octreotide), broad spectrum antibiotics, and non-selective beta blockers (propranolol). The somatostatin analogues decrease splanchnic blood flow, decrease secretion of gastric acid and pepsin, and stimulate mucus production.[1] An acidic environment promotes platelet disaggregation, fibrinolysis, and impairs clot formation, hence the utility of using PPI therapy.[1] There is no proven mortality benefit to using PPI therapy, although it is still commonly used in practice. Early upper endoscopy within 24 hours of presentation is recommended in most patients because it confirms the diagnosis and allows for targeted treatment.

The National Clinical Guideline Centre (NCGC), on behalf of the National Institute for Health and Clinical Excellence (NICE), developed a set of guidelines for the management of acute upper GI tract bleeding.[5] The NICE incorporated these guidelines to develop an algorithm to give an overview of the management.[6]

These guidelines suggest that if the patient is hemodynamically stable throughout their presentation, the physician should assess the clinical severity of the bleeding since it helps guide treatment. Advanced age, comorbidities, and hemodynamic instability require more aggressive treatment. Scoring systems, such as the Blatchford scoring system [7] and the Rockall scoring system, [8] have been developed to further help assess the risk of the patient. The Blatchford scoring system (Figure 1) uses clinical and laboratory factors (systolic blood pressure, blood urea nitrogen, hemoglobin, and pulse) to assess the need for clinical intervention (endoscopy, surgery, or blood transfusion) on a scale of 0 to 23. Most patients with a score of 6 or higher require intervention. Essentially, is useful in the prediction of low-risk patients who do not require endoscopic therapy and who may be suitable for outpatient treatment.[10] The Rockall scoring system (Figure 2) provides a risk estimate of recurrent bleeding and death. It is based on a score range from 0 to 11 points. An overall score of 0-2 associated with excellent prognosis.[1] 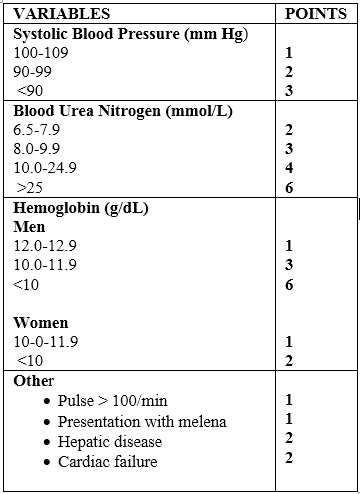