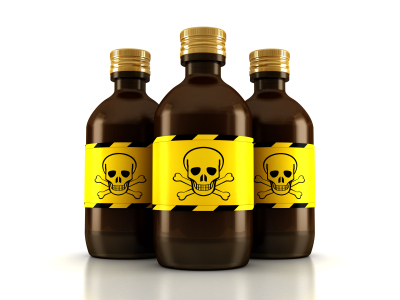 Just like ethanol, ethylene glycol and methanol cause inebriation and are often ingested by a desperate alcoholic or as a suicide attempt.


Whereas ethanol is preferentially metabolized by alcohol dehydrogenase to acetyl-CoA (which our body uses in the Kreb's Cycle), methanol and ethylene glycol are metabolized by the same enzyme as formic acid and glycolic acid, respectively, both of which have no natural metabolic pathway.

Methanol is found in windshield washer fluid, camp cooking fuel and antifreeze. End organ damage is generally visual, with a spectrum of presentation from subtle visual loss to complete blindness. Ethylene glycol has a sweet taste (children love it) and is found in antifreeze. Its metabolites are nephrotoxic, with oxalic acid binding with calcium to form crystals in the tubules and intermediates causing acute tubular necrosis. Oxalate crystals can be detected on a formal microscopic urinalysis (not dipstick) in late stages of intoxication. With both ingestions, be concerned about an anion gap metabolic acidosis, although the osmolar gap is only useful if markedly elevated (>50). Send serum levels immediately if they are suspected because often times they are "send out" labs and can be very delayed.

The key to treatment is inhibition of alcohol dehydrogenase, which can be achieved with an ethanol drip or fomepizole. However, if the patient already has severe end-organ damage or severe acidosis, stopping the enzyme activity is insufficient. At this stage, you must rid the body of the toxic metabolites by hemodialysis.

Posted by AAEM Resident and Student Association at 2:56:00 PM