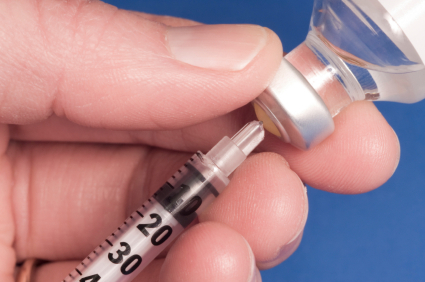 Recently, I saw a patient in the ED who was hyperkalemic and hypoglycemic. The patient was in acute renal failure secondary
to Bactrim (TMP-SMX) use for cellulitis. During the first 24 hours of her stay in the hospital, she continued to experience episodes of hypoglycemia. In cases like this, it is important to remember the underlying physiology of renal failure before automatically treating hyperkalemia with standard protocols. (Standard treatment is "C BIG KA," or calcium, bicarbonate, insulin with glucose, kayexalate and albuterol).

Why? Sure, insulin is one of the early treatments for hyperkalemia, and usually we give it with some glucose. However, it is important to remember that the kidneys are a major site of insulin clearance from the body. In acute kidney injury, the glomerular filtration rate is assumed to be less than 10 mL/min, so not only is potassium clearance reduced (leading to hyperkalemia), but the insulin clearance is greatly reduced, too. This leads to insulin retention, and, even in an obese, diabetic female, can cause severe hypoglycemia. Most protocols for hyperkalemia call for 1 amp of D50 along with the standard 10 units of insulin, but patients in severe renal failure may need significantly more glucose if they continue to retain insulin. Be aware of the physiology of hypoglycemia in renal failure, order frequent blood glucose monitoring, and give additional glucose as needed
Posted by AAEM Resident and Student Association at 3:13:00 PM