Intro
“Dysbarism” collectively refers to diving-related disorders. These disorders are relatively common and range in severity. This topic is high yield on board exams and is also important for emergency medicine providers to recognize so as to administer timely interventions. This article differentiates and categorizes disorders by those occurring with descent, at depth, and with ascent (Table 1).


DISORDERS OF DESCENT
Facial Barotrauma (Mask Squeeze)
Negative pressure within the mask and over the eyes must be equalized. This is often done by exhaling through the nose. Failure to equalize leads to a negative pressure effect on the periorbital and ocular vessels, resulting in edema and subconjunctival hemorrhage.[1,2] Emergent complications are rare but may include hyphema, subperiosteal orbital hemorrhage, and intraorbital hematoma. In these cases, emergent ophthalmology consultation should be obtained as surgery or needle aspiration may be required.[3,4] However, the majority of facial barotrauma cases are benign and do not require treatment.[1,3,4]
Key Phrases: Conjunctival edema, subconjunctival hemorrhage, and petechial hemorrhage after diving.

Middle Ear Barotrauma (Barotitis, Ear Squeeze)
Middle ear barotrauma is the most common disorder in dive medicine.[1,5] Water exerts pressure on the tympanic membrane (TM), displacing it inward and causing pain. Failure to equalize pressure via Valsalva maneuver can result in TM rupture with subsequent tinnitus and permanent hearing loss. Sudden unilateral influx of water into the middle ear can cause a caloric and vertigo response.[1,5,6] Risk factors include Eustachian tube dysfunction or other conditions causing Eustachian tube edema such as upper respiratory illness. The treatment for TM rupture is prompt otic antibiotics.
Key Phrases: Pain, vertigo, tinnitus, and hearing loss with descent.

DISORDERS AT DEPTH
Nitrogen Narcosis (Rupture of the Deep)
Nitrogen narcosis typically occurs at depths greater than 100 feet when partial pressures of inhaled nitrogen are increased, leading to higher quantities of nitrogen dissolved in the blood.[5-8] Nitrogen acts as an anesthetic gas causing a clinical picture similar to ethanol intoxication.[1,5-7]  Symptoms include lightheadedness, impaired judgement, false feeling of well-being, and euphoria. Symptoms can progress to hallucinations and altered consciousness.[1,7,8] Nitrogen narcosis can be avoided by using mixed gasses with lower nitrogen concentrations. The disorder itself is not usually fatal, however, impaired judgment and confusion may lead to poor decisions resulting in injury or death at depth.[5] The treatment is ascent,[1,7] ideally at a rate no faster than thirty feet per minute.[8]
Key Phrases: Appears intoxicated, confused, or disoriented at depth of >100 feet.

Oxygen Toxicity
Oxygen can be neurotoxic in high enough concentrations. At 1.4 atmospheres, oxygen becomes acutely neurotoxic.[6,9] Typical presentation includes auditory and visual hallucinations, muscle twitching, and seizures. This can occur in divers at extreme depths such as industrial divers at 300-400 feet.[6] Prevention includes breathing mixed gases with decreased oxygen concentration.[1,9] Treatment is symptomatic control and timed ascent at no more than thirty feet per minute.[8]
Key Phrases: Seizure or muscle twitching at depth. Patients may be industrial divers at extreme depths.

DISORDERS OF ASCENT
Alternobaric Vertigo
In this condition, divers fail to equalize ear pressure symmetrically during ascent. The risk factors are similar to those of middle ear barotrauma, including Eustachian tube congestion or edema.[8,10] Pressure on the unilateral labyrinth in the middle ear leads to pain, nystagmus, and vertigo.[5,8,10] This condition is self-limited.[5,8,10]
Key Phrases: Ear pain, nystagmus, and vertigo with ascent after failure to equalize ear pressures.

Pulmonary Barotrauma (Pulmonary Over Pressurization Syndrome (POPS))
Pulmonary barotrauma is the most severe form of barotrauma and results from overexpansion of the lungs during ascent secondary to inadequate exhalation (i.e. breath holding during ascent or emergent ascent).[1,5,6,11] The ambient pressure in the water decreases as the diver ascends which allows the air within the lungs to rapidly expand. This can lead to pneumothorax, pneumomediastinum, subcutaneous emphysema, alveolar hemorrhage, and potentially death.[5,11] The clinical picture is akin to typical pneumothorax or pneumomediastinum and may include substernal pain, tachypnea, and Hamman’s sign (crunching, rasping precordial rales synchronous with the heartbeat rather than with respiration.[1] Presentation may be delayed several hours after ascent. Subcutaneous emphysema, pneumomediastinum, and pneumothorax do not require hyperbaric recompression or other specific treatments other than standard tube thoracostomy for large pneumothoraces.[8,1] The most severe complication of POPS is arterial gas embolism (AGE) due to gas entering injured blood vessels. Management of AGE includes rapid hyperbaric oxygen treatment, intravenous fluids, and high-flow oxygen.[1, 6]
Key Phrases: Pneumothorax or pneumomediastinum picture after fast or panicked ascent.

Decompression Sickness (DCS)
Decompression sickness occurs when divers rapidly ascend and nitrogen is released from tissues forming bubbles in the vasculature. Diving creates a significant pressure gradient with ambient pressures increasing with depth. As divers descend, more nitrogen dissolves into bodily tissues, especially fat, due to nitrogen’s lipophilicity.[1,5,6,8,11] Divers are at increased risk with increased depth, longer dives (commercial divers), and rapid ascent.[11] During ascent, the ambient pressure decreases. If the ascent is not properly timed, nitrogen diffuses into vasculature from the surrounding tissues.[1,5,6,11] Symptoms vary depending on the type of DCS and can present with different onset times and characteristics. DCS is broken into two categories, Type I and Type II.

Type I occurs about 1-2 hours after surfacing. Systems affected in Type I include skin, lymphatic, and musculoskeletal. Predominant symptoms include arthralgias (known colloquially as “the bends”), pruritus, lymphadenopathy, edema, and skin rash that is described as marbling.[5,8,11] 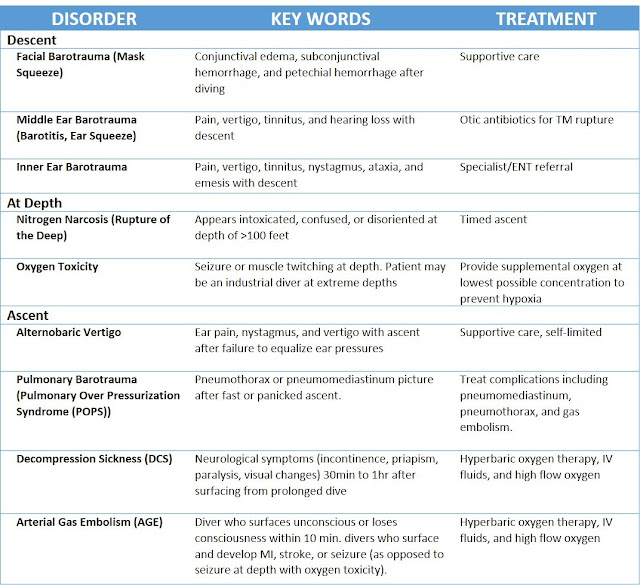 
Posted by AAEM Resident and Student Association at 2:03:00 PM