The Pulseless Extremity: An Approach to Acute Ischemic Limb

A 55-year-old man with a past medical history of atrial fibrillation and aortic atherosclerosis presents to your emergency room with numbness, tingling, and pain in his left lower extremity below the knee. A tech is pushing him in a wheelchair because the pain is too great and he cannot move his foot. His foot appears pale in comparison to the other. The patient writhes uncomfortably in bed. Brief examination of the leg demonstrates a cold extremity with no posterior tibial or dorsalis pedis pulses.

Clinical Manifestation
Acute limb ischemia (ALI) presents emergently as decreased limb perfusion that threatens limb viability.[1] It can arise as a complication from preexisting arterial disease, following surgical graft placement, or de novo from embolus dislocation.[2] The clinical presentation can take on many forms depending on the patient’s comorbidities, but the above case demonstrates the stereotypical presentation. ALI can be classified according to severity as viable, threatened, or nonviable, which is determined by the following features: 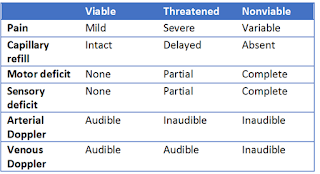 The six “P’s” of ALI­—paresthesia, pain, pallor, pulselessness, poikilothermia, and paralysis­—are evident in this patient. The pain is initially located distally, progressing proximally and increasing in severity with time. However, the pain may decrease with progressive ischemic sensory loss. “Blue toe” syndrome is a form of ALI that consists of cool, painful, and cyanotic toes due to embolic occlusion of digital arteries with atherothrombotic material from proximal arterial sources.[4] However, many patients will not present classically and this may further be disguised by patients with known vascular disease and collateralization. Thus, having a high level of suspicion and performing a thorough exam on every patient is prudent.

Etiology
Several etiologies contribute to the occurrence of a pulseless limb, though embolic disease and thrombosis of an atherosclerotic plaque are the primary causes.[5] Cardiac, arterial, and paradoxical emboli are potential sources of emboli in ALI. Contributing cardiac abnormalities include atrial fibrillation, myocardial infarction, endocarditis, valvular disease, atrial myxoma, aneurysms, and prosthetic valves. These all serve as niduses for the formation of a clot, which then breaks off and travels to limbs.[6]

Emboli will lodge at a narrowing in an artery or a branch point, most commonly affecting the femoral (28%), arm (20%), and popliteal (17%), and aortoiliac (18%) arteries.[5] Atherosclerotic plaques can also precipitate an ischemic limb. These areas of progressive narrowing can result in stasis of blood flow, hypercoagulability, and eventual clot formation. In patients in which atherosclerosis is the perpetrator, formations of collaterals may lead to milder symptoms and a less acute presentation.[7]

History
Key historical components include duration, location, intensity, acuity of onset, and changes over time. If the symptoms occurred spontaneously, embolic occlusion should be suspected. Specific medical history such as smoking, hypertension, and diabetes as well as atrial fibrillation, recent myocardial infarction, aortic disease, aneurysmal disease, prior revascularization, and deep vein thrombosis (DVT) may all lead to a higher suspicion of acute limb ischemia.

Physical Exam
Initial exam will include palpation of the pulses throughout the affected extremity. This should include palpation above and below the suspected deficit. Make sure to assess for a difference between the affected and unaffected limbs. If palpable pulses cannot be found, an attempt should be made with Doppler ultrasound. Sensation and motor strength should be assessed and the absence of either raises concern for late presentation.

Laboratory Evaluation and Imaging
Assessment of ALI should include the following:
CK demonstrates the associated amount of muscle loss and has predictive value regarding the need for amputation.[8] Systemic lactate values have proven insignificant in the care of ALI, but lactate levels below the level of occlusion can be used to assess for degree of ischemia as well as the potential for reperfusion injury.

If time and viability of the limb permits, order imaging. The gold standard of imaging is intraoperative arteriography of the affected limb; however, both computed topographic angiography (CTA) and vascular duplex are highly sensitive and specific. On CTA, a thrombus presents as a sharp cutoff or a clot silhouetted by contrast media.[9] Vascular duplex can be used in patients with a contrast allergy or kidney injury and have comparable results to angiography. These studies may also differentiate an embolic source from atherosclerotic based on the appearance of the vessels.

Differential Diagnosis
Make sure to keep the following in a differential when suspecting an ischemic limb:
Management and Disposition
Initial treatment consists of anticoagulation and early consultation. Anticoagulation may consist of a heparin bolus and drip or low-molecular weight heparin and consultation may be with interventional radiology or vascular surgery, depending on your institution. Prompt consultation is always warranted as delay may result in worse outcomes and possible loss of limb.[10] The ultimate method of revascularization will be determined by the consultative service and may include thrombolysis, thrombectomy, stenting, or bypass.[12]

Prognosis
ALI can result in ischemic rest pain, ulcers, gangrene, or amputation. Prompt diagnosis and revascularization improves outcomes for patients with ALI.[12] A viable limb may not require immediate intervention, while a threatened limb likely will. Reperfusion injury can lead to highly toxic free radicals in the circulation and a systemic response of acid-base and electrolyte imbalances. Severe reperfusion injury may lead to renal failure and cardiac instability.[10]