Case
A 42-year-old female presented to the emergency department with her husband for new episodes of apnea that had been occurring over the last few days. She currently felt well and review of systems was negative except for possible jerking movements that had been occurring prior to the apneic episodes. She had no history of seizures. Past medical history included untreated Graves’ disease. She was not on any prescription medications. Physical exam was unremarkable, including a normal neurologic exam. Laboratory evaluation was significant only for hypokalemia of 2.9 mEq/L, ionized calcium of 1.1 mg/dL, and low thyroid stimulating hormone (TSH). Electrocardiogram (EKG) was obtained and is shown below. 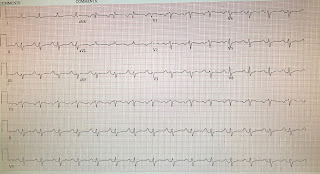 The patient’s QTc was greater than 700 msec on initial EKG and QRS was widened at 126 msec. On further questioning, the patient admitted to taking 160 mg of loperamide daily to treat her opioid addiction. She was admitted to the intensive care unit (ICU) for cardiac monitoring, electrolytes were aggressively replaced, and loperamide was held. Her QTc decreased from greater than 700 msec to 520 msec and she was discharged home in good condition.

Discussion
There is a growing body of literature reporting the use of loperamide not only as a recreational drug, but also as a treatment for opioid withdrawal symptoms. The literature also suggests an increase in the number of cases of cardiotoxicity due to loperamide. Loperamide is an over-the-counter anti-diarrheal medication that acts as a peripheral m-receptor agonist. When taken at recommended doses—2-4 mg as needed for loose stools, not to exceed 16 mg per day—it is an effective anti-diarrheal medication. However, when taken in large doses, it can cross the blood-brain barrier and act directly on central m-receptors, causing central opiate effects.[1] Between 2002 and 2013, there was an average of sixteen calls per year to the California Poison Control System regarding loperamide. In 2014, there was a large increase in calls to the poison center, which coincided with increasing online drug forum descriptions of how to achieve opiate-like highs with loperamide.[2] As with any opiate overdose, these patients can have miosis, bradycardia, respiratory depression, and apnea, and often respond to naloxone.[1]

In addition to m-receptor effects, loperamide also acts on cardiac sodium channels and potassium efflux channels, leading to a widened QRS and QT, respectively.[5] Ventricular dysrhythmias have been reported in doses as low as 70 mg daily. Polymorphic and monomorphic ventricular tachycardia have been reported with loperamide secondary to its cardiac channel effects.[6]

There are no studies comparing the best management for ventricular dysrhythmias caused by loperamide overdose; however, it is recommended to treat similarly to other drug-induced dysrhythmias. Polymorphic ventricular tachycardia (torsade de pointes) may be more likely to occur from long QTc produced by loperamide because of its likelihood to produce bradycardia as well. The first-line drug for prolonged QT-induced torsade de pointes is intravenous magnesium sulfate. If the patient does not respond to magnesium, overdrive pacing may be required at a rate of greater than 100 beats per minute.[7] Tachycardia is protective in prolonged QT, and decreases the likelihood of torsades de pointes, thus the need for overdrive pacing. It is possible that sodium bicarbonate would be necessary for widened QRS complex dysrhythmias as well. Electrolytes should be kept in normal ranges as part of resuscitative efforts.[7]

Loperamide misuse is increasing across the United States as both a recreational drug and a way to decrease symptoms of opioid withdrawal. There is a growing number of case reports in the literature describing potentially fatal cardiac dysrhythmias from this drug and emergency providers should be aware in order to best identify and treat these patients.