Residency Work Hour Restrictions: Is the Pendulum Swinging Back? 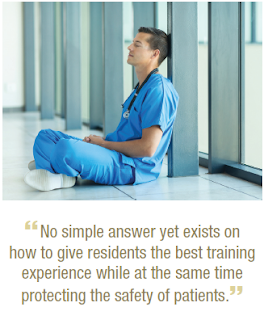 “I walked into the hospital on my first day of residency and didn’t walk out until 36 hours later. Those were the darkest days of my life, but I am the doctor that I am today because I went through that,” I still distinctly remember these words from one of my more senior physician mentors when our discussion turned to work hour restrictions. As I wondered how it was possible to physically stay awake for so long, there was no doubt in his mind that work hour restrictions were dampening the training experience of newly minted residents.

First instituted in 2003 and revised again in 2011, interns now “enjoy” an 80-hour work week restriction with a maximum shift length of 16 hours (PGY-2s and above are still allowed to work up to 28 consecutive hours). However, the pendulum may be swinging back on strict work hour restrictions as new research on the topic becomes available.

The event that led to work hour restrictions was the death of Libby Zion in 1984. An overworked medical intern on a 36-hour shift prescribed meperidine to the 18-year-old patient, who was on an antidepressant, the MAO inhibitor phenelzine. This drug combination is thought to have caused the serotonin syndrome, leading to Zion's death.

A study recently published in the New England Journal of Medicine compared the 16-hour maximum shift with a more flexible policy allowing longer shifts, with some extending over 24 hours (commonly known as the FIRST trial).[1] It found no difference in patient safety and outcomes.

Many EM residents took part in this study, although only on off-service rotations. This study has not been without controversy, as residents never agreed to take part. Depending on their site, they were assigned to one group or the other without any choice.

Interestingly, in discussing the experience with residents who trained at sites with the flexible policy, most preferred the longer shifts. The biggest benefit was that it allowed them more full days off. For example, two interns instead of four are needed to cover Saturday and Sunday shifts. However, they admitted it felt dangerous at times for them to work while completely exhausted.

The rationale behind work hour restrictions seems simple: exhausted and overworked residents are more likely to make mistakes. However, shorter shifts mean more hand-offs between providers. For example, “Was I signed out to pull the right or the left chest tube?”

Most recently, the ACGME Task Force has proposed lifting the 16-hour cap on shifts for interns, to decrease the number of hand-offs and improve continuity of care. These changes could be implemented as soon as the 2017-2018 academic year.

For most EM residents, the impact would likely only be felt on off-service rotations that require longer shifts, such as ICU rotations. Currently, emergency department shifts are limited to 12 hours and the work week to 60 hours. There are no proposed changes to these policies at this time.

Ever since the implementation of work hour restrictions, fierce controversy and debate has reigned supreme. No simple answer yet exists on how to give residents the best training experience while at the same time protecting the safety of patients. It remains unclear exactly what changes will occur over the next few years, but it seems the pendulum is swinging back towards fewer restrictions and longer work hours for residents.

From the Editor:
If you are unfamiliar with Libby Zion’s case, you should look it up and draw your own conclusions. No matter what you think about house staff work regulations, in my opinion the aftermath of Libby Zion’s death is a graphic example of the damage that can be done by an investigation and error analysis based on speed and emotion rather than evidence and thorough deliberation. To this day her cause of death remains uncertain, but I think it had nothing at all to do with house staff fatigue. If academic medicine’s training system bears any responsibility for Zion’s death, the fault was a lack of attending supervision. It was clear to me at the time, however, that Zion’s parents took some comfort in their grief by waging their successful campaign to restrict resident work hours. While their actions are understandable, such policies should be based on real data produced by rigorous research, not the passions of grieving parents. Now, more than 30 years later, we might be discovering that there is more to resident fatigue and patient safety than just hours worked per day or per week. The moral of this story: whenever possible, important decisions and policies should be based on evidence.