An 18-year-old male presents to the emergency department (ED) stating, “Doc, I’m really drunk.” He and a friend were drinking in the friend’s garage. The patient drank one “very strong” sweet-smelling drink, which was prepared by his friend. He began to feel sick and nauseated and rode his bike home (with difficulty due to this intoxication, but without any falls or trauma). He vomited twice and his mother referred him to the ED. Attempts to contact the friend were unsuccessful.

How would you evaluate this patient?

Several intoxicants can cause similar symptoms. While ethanol is the most likely cause, in patients with unclear ingestions other alcohols should be considered as well. The following is a brief summary of the alcohols often tested on in-service and board exams; a summary table is included at the end:

The “alcohols” we will discuss:

Each of these alcohols can cause similar intoxication symptoms. We are quite familiar with the symptoms of ethanol intoxication; however, the other alcohols have some additional defining features which are easily testable on an in-service or board exam: [1,5-7]

Obtaining an appropriate history is most important. Start by asking the patient about alcohol or drug use and the types of alcohol or drugs used. Asking about suicidal thoughts is also important. Cases of clear-cut ethanol ingestion, confirmed by a reliable patient or family/friend, typically do not require an evaluation for toxic alcohols. Patients with suicidal ideations and an unclear ingestion, unknown types of alcohol-like ingestions (such as our example above), or patients admitting to ethylene glycol/methanol use should raise concerns. In cases concerning for toxic alcohol ingestion, the initial workup should include a finger-stick glucose, basic metabolic panel, ethanol level, urinalysis, serum osmolality, and venous blood gas. Methanol and ethylene glycol levels are “send out” tests at most facilities, limiting the clinical utility of these tests in the ED. However, if methanol or ethylene glycol ingestion is suspected, these levels should be sent and followed by the admitting team. Additional testing, such as acetaminophen and salicylate levels, and an EKG should also be considered in cases of uncertain ingestions. It is also important to calculate the anion gap and osmol gap.[1,3,5-7] 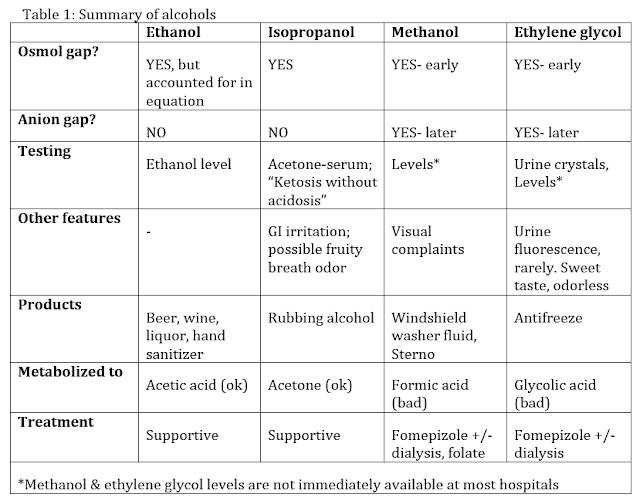 Intoxicated patients frequently end up in the ED. Emergency physicians should consider the possibility of toxic alcohol ingestion, both clinically and while answering board-style test questions.