Introduction & Pathophysiology
Hepatic encephalopathy (HE), also known as portosystemic encephalopathy, is a potentially deadly complication of chronic liver failure. HE is commonly caused by liver failure due to cirrhosis, but there are non-cirrhotic causes as well. Cirrhosis is commonly caused by alcohol abuse and hepatitis B & C, each of which contribute to chronic liver scarring.[1] Symptoms are similar regardless of the underlying etiology. The basis of hepatic encephalopathy is ammonia accumulation in the brain, which produces drastic motor and cognitive impairment.[3] HE results in a constellation of neurological problems that includes chronic fatigue, difficulty thinking, forgetfulness, asterixis, poor judgment, excessive confusion, disorientation, personality changes, and hyperactive deep tendon reflexes.[2] Patients with HE may also demonstrate stigmata of chronic liver disease: jaundice, ascites, peripheral edema, telangiectasias, caput medusae, and palmar erythema. In general, physicians use scoring systems, such as the West Haven Criteria, when diagnosing HE because of the variety of symptoms HE can cause in any individual patient. The criteria depend on the severity of the patients’ clinical symptoms, whether they are cognitive, motor, or both (see summary in table 1). [2,4] 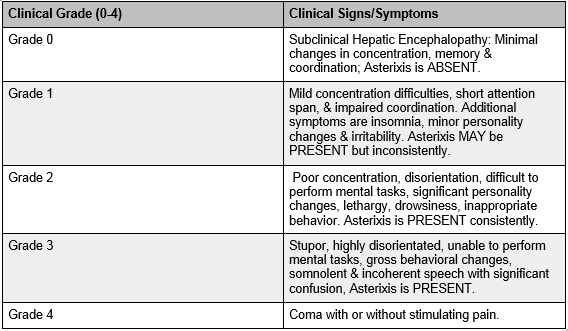 Emergency Setting
In the ED, physicians must recognize the signs of HE, begin treatment, and decide on an appropriate disposition for the patient. After recognizing the above signs and symptoms, emergency physicians should start by checking a glucose level, obtaining labs, and hydrating the patient with normal saline (0.9% saline solution). Intravenous dextrose should be considered. HE is a clinical diagnosis, however several laboratory studies should be obtained including: CBC, electrolytes, BUN, creatinine, ammonia, pH, and hepatic function tests [5] Therapies used to reduce circulating ammonia should be considered next. These therapies include non-absorbable disaccharides (oral Lactulose or Lactilol) and oral antibiotics (Rifaximin).[1] Both reduce intestinal production and absorption of NH4+.[1] They are given concomitantly, producing a synergistic effect to prevent the intestinal bacteria from producing ammonia; lactulose specifically also acidifies the colon, resulting in conversion of ammonium to ammonia which is subsequently excreted in the stool.[1] An alternative treatment is oral neomycin if the patient’s symptoms are refractory to lactulose treatment, but its use has been limited because of a concern for nephrotoxicity and ototoxicity.[1]

After these initial steps are taken, the emergency physician should determine the most appropriate disposition for the patient. Physicians should take into account the patient’s mental status, grading of HE, individual history, and potential other causes for the patient’s change in mental status. Discussion with the patient’s hepatologist or gastroenterologist is advised — if the patient has one. Generally, admission is indicated for the first episode and for any significant exacerbation of HE. It may be helpful to attempt to determine the underlying cause that precipitated the episode of HE.[1] The main precipitating factors include: drugs (sedatives or narcotics), hypovolemia (e.g. from vomiting or diarrhea), increased nitrogen load (from GI bleeding), and infections (think about spontaneous bacterial peritonitis, pneumonia, or UTI) [5] It should be noted that an elevated ammonia level doesn't necessarily confirm or rule out HE in patients with chronic liver disease.[6]

In summary: 1-Consider the diagnosis (altered mental status in a patient with liver disease), 2-Evaluate for other issues (hypoglycemia, infection), 3-Start treatment (fluids and Lactulose), 4-Make an appropriate disposition.