A 35 year old male presents to the ED after a motor vehicle collision with ejection. The patient has a Glasgow Coma Scale of 4 on arrival and is immediately intubated. The patient has equal pupils and has facial and chest abrasions. The patient is initially tachycardic with a heart rate of 115. He is normotensive and saturating well on the ventilator. A bedside ultrasound shows no pneumothorax and FAST examination is negative. While waiting for the patient to go to CT an EKG is obtained. 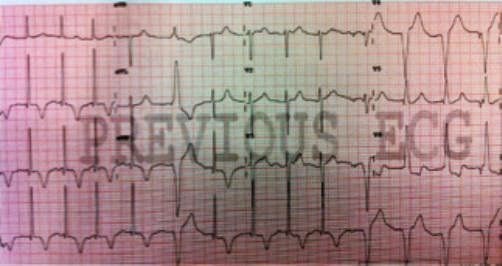 What does the ECG show?


Neurogenic T-Waves. This patient has a large subdural hemorrhage with midline shift.

Brain injury can cause numerous effects on the body. One effect that is often not considered is the myocardial response. The ECG above demonstrates deep, inverted T-waves also known as “cerebral” or “neurogenic” T-waves. Brain injury related EKG abnormalities are particularly common after subarachnoid hemorrhage, where they are reported in 49–100% of cases. However, these changes can also be seen in massive ischemic stroke (such as with an MCA infarct) and other causes of elevated intracranial pressure. These changes are usually seen in patients with significant neurologic injury.

The mechanism of these abnormalities is unknown, but studies suggest that the neurologic injury causes a surge of circulating and local myocardial catecholamines. This can lead to coronary vasoconstriction, stunned myocardium, and a neuro-inflammatory response. Neurogenic cardiac abnormalities are usually transient, and treatment should be directed at brain injury.

It is important to consider the other etiologies of T-wave inversions such as ischemia, electrolyte abnormalities, and hypothermia. There are often multiple etiologies for the origin of an abnormality seen on ECG, and it is important to have a broad differential. Always remember to treat the patient and not the test result.