Medical and Surgical Emergencies in the Pregnant Patient 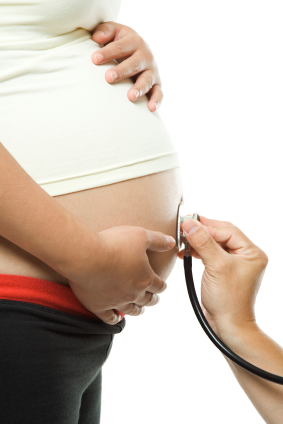 For most of us, pregnant patients can be intimidating (and not just because of their hormones). While it would be nice to think that our obstetric colleagues can handle all emergencies that occur in pregnancy, it is important to remember that not all baby-bump wielding women present with a purely obstetric complaint. Here are just a few things to keep in mind!

Appendicitis is still the most common surgical emergency in pregnant patients. Incidence is the same in pregnant patients as it is in non-pregnant patients (7%). During the first 20 weeks, clinical findings are usually similar to that of the non-pregnant patient. The
most constant feature in all gestational ages is right-sided abdominal pain (in only 23% of pregnant patients does the location of the appendix change from the RLQ). Management should include both OB and surgical consultation and judicious imaging with US or helical CT (with rectal contrast and limited study, only 300mrad fetal radiation exposure). MRI is emerging as a sensitive and low-risk alternative.

However, laparoscopy or laparotomy is the diagnostic procedure of choice in these patients, and early exploration is encouraged. These procedures are relatively safe during pregnancy, especially in contrast to the risk of maternal morbidity from failure to diagnose and perforation. Thromboembolic disease is the leading cause of death in pregnancy.

Pregnant women are six times more likely to develop venous thrombosis than non-pregnant women, most commonly six weeks pre- and post-partum. Lower extremity Doppler US is still the first-line test for DVT in pregnancy, but keep in mind that isolated iliac vein disease is common in pregnancy, and leg studies may be normal in such cases. Don't be afraid to scan these ladies! There is no known risk of fetal disability, anomaly or growth restriction at doses of radiation less than 5 rads.

While there is still some debate as to which imaging modality is more sensitive in the pregnant patient, the average dose of radiation for a VQ scan (between 7-31mrad) or CT chest (30mrad) is well under the 5 rads recommendation. As you all remember, warfarin is contra-indicated in pregnancy, but heparin and low-molecular-weight heparin are both considered generally safe in pregnancy.

Posted by AAEM Resident and Student Association at 3:35:00 PM